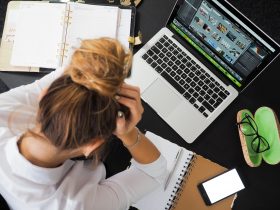 Trigger Warning: This article might include graphic reference to topics such as sexual assault.

Netflix shows have a hit or miss history. In the past 1.5 years, Netflix had some extremely questionable (but popular) shows with a lukewarm plot, romanticized Ignorance and toxic romance. Good enough to work as a glorified white noise machine, but not good enough to sit and absorb the story. As Netflix keeps on releasing shows that are lesser than the sum of its part. Let’s dissect Netflix’s latest overhyped offenders Emily in Paris and Bridgerton.

The golden globe winning Emily in Paris, starring Lily Collins, is about Emily, who goes to Paris. The show has a stunning setting with the romantic Paris as its backdrop. Created by showrunner Darren Star who was also responsible for Sex and the City. I saw the trailer and went in with shining hope and a yearning for a little light-hearted rom-com. But all hope was quickly exorcised out of my body Within the first 5 minutes of the first episode.

A Caricature of Paris

Emily in Paris is a story of an extremely tone-deaf woman in a caricature of Paris doing increasingly absurd things. Emily in Paris is not about Paris, but the cliche overdone stereotypical version of Paris that Hollywood thinks it to be. The show is astonishingly racist, unaware, imperialist, stereotypical and just bad. If you can think of an overdone French stereotype. I can assure you that you will encounter it within the first few episodes. And you will also have the displeasure of watching Emily try to revise this particular stereotype and mould it to fit the American standard.

How is her social media successful?

Emily in Paris is one American woman stomping around the fashion capital of the world in straight-from-runway outfits and spewing basic doltish marketing mantras like “To build a brand, you must create meaningful social media engagement”. To which her French marketing firm colleagues say, “You’re quite the brand ambassador”. Cause, of course, the tepid words of the American girl who isn’t even qualified to be here is the gospel. The whole Ordeal becomes even more laughable as Emily doesn’t actually have any knowledge or finesse in her social media acumen.

Aside from the racist cliches, Emily in Paris has a romantic plot that didn’t sit right with the general media. The duo Emily and Gabriel started on a sweet note. Their relationship quickly took a romantic turn; even so, Gabriel had a girlfriend named Camille. I firmly believe that Gabriel should have been honest about having a girlfriend. All things came crashing down as Emily continued to steal kisses from Gabriel and sleeps with him on the final episode of season 1. whatever happens between two consenting adults is none of anyone’s business. Still, all benefit of the doubt flies out of the window as Emily spends the night with Camille’s underage brother, who was 17.

A Lack of Diversity

The show lacks even the shadow of inclusivity with one black and gay (a double hitter, I know) cast member with maybe 3 speaking lines. And one Asian woman who sings La Vie En Rose in the middle of busy Paris streets. Overall, Emily in Paris is an embarrassing caricature of the French culture that gleefully embraces quirky ignorance. And I am not even going to attempt to speak about how Emily referred to Paris as “the whole city looks like Ratatouille.”

Bridgerton is Netflix’s latest period drama with an inclusive twist. The set is beautiful, the cast is impressive, and the story had potential. Set in 1813 Regency-era London, Bridgerton is the tale of the Bridgerton family and the Featherington family. As they try to find suitable lavish families to marry their children into.

With an obvious inspiration taken from Gossip Girl. And the unshakable plot of “two people who dislike each other forced into fake dating as they try to hide their feelings for each other cause of some kindergarten level misunderstanding”. And that’s all the praise I had for this show.

Bridgerton is a mind-numbingly shallow show that looks lavish, has regency era as its backdrop but forgets to bring a story to the table. Subsequently, this is Netflix’s answer to downtown Abby that failed to leave a mark. Bridgerton falls flat and stale with a bunch of sex scenes sprinkled around. The lead couple is perhaps the most toxic duo I witnessed recently as they have zero communication skills. Most of the Bridgertons conflict can be solved if these two people just sat down and talked to each other. But hey, where is the drama in that?

Bridgerton suffers from a severe case of race baiting, queer bating and featurism. Taking a step back from the lackluster, blood-warm plot. The show has a pretty diverse cast on the surface, but it fails to give their background and race any real agency. Some may argue that Bridgerton is a fantasy. Thus, it doesn’t need to divulge into the complexity of race, sexuality, and social implications. Regardless Brigerton’s race issue left much to be explored. They DO have people of colour and different sexualities. But do they get any agency aside from pushing this dead weight of a plot along?

Communication is a Virtue

Circling back to the lead couple. If you want to take a lesson from Bridgerton, it would be not to solve your relationship problems with sex. Talk to your partner. Let them know of your expectations and your limits. The main male lead, Simon, didn’t want children to cause his father was abusive. And he could have expressed this at any given moment before they got married. Daphne is a generally uninteresting character with a relatively stale plot comparing to the rest of the cast. She isn’t a socialite like Eloise, parts of an underground art society like Benedict, or has family secrets like Penelope. With all things considered, this couple doesn’t work. Bridgerton has an artificial charm where the tropes were supposed to be charming, but the chemistry isn’t organic or coherent.

This leads to the rape scene as mentioned before, Simon doesn’t want children. And this greatly bothers Daphne, whose main goal in life is to get married and have children. And she forced Simon to ejaculate inside her even so Simon verbally dissented to it. This act being apparent sexual assault and violation. As I was watching this scene, I had a faint hope that they would adequately tackle this case of sexual assault. But it ended with Daphne taking the victimhood and being heartbroken cause her plan didn’t work. The show goes a long way to portray Simon as the bad guy for not consenting to have children. Later in the show, Simon gets gaslighted into having children and staying in the relationship. And Daphne’s utter violation of Simons bodily autonomy was never acknowledged again. Yaay activism.

So, what happened, Netflix?

Why are most Netflix originals so bad?

From pedophilia (remember Cuties?) to racism to sexism to wrongful depiction of sexual assault. In the past few years, it has become a weekly ordeal to see news on a new bad Netflix show. But is it an honest mistake? Or just a very bad marketing ploy to gain exposure given that Netflix buys the royalties to their shows. Meaning Netflix can earn revenue from these shows for as long as they like. As netflixs Emily in Paris and Bridgerton gain resounding success. Contrasting to television first shows, the network will pull the plug if the show isn’t good enough. Netflix shows don’t have to be good to be profitable. It just needs to be good enough and have a poorly made stamp of diversity, inclusivity and a nice-looking set. The most extensive streaming service that laid waste to the cable system that we knew Once Upon a time. Subsequently, Netflix created the binge-watching phenomena with easily digestible shows.

With a seemingly endless supply of movies, shows, documentaries. In the past 1.5 years, Netflix had an astonishingly massive number of bad shows. Netflix had 207.64 million paid subscribers worldwide as of the first quarter of 2021. Most Netflix subscribers are based in the United States and Canada, with the U.S. and Canada accounting for over 74 million of Netflix’s total global subscriber base. Netflix brought in a revenue of 2.76 billion U.S. dollars in the year 2020. Which does explain why so many of these shows strongly capitalize on the American viewpoint. Or the American imperial ignorance, to be exact.

Regardless Netflix has some pretty good shows. So, I leave you with some recommendations. And you can give me some Netflix recommendations in the comments below.