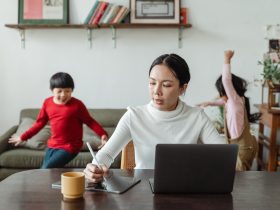 The Dark Side of Zoom: How We Pay the Price for Work From Home

Women’s Equality day is celebrated on August 26th. Yes, women really had to dedicate a day to celebrating their achievements in gender equality. A competition since birth, a competition not so fair, a race to prove our own worth. Even to do the most common acts in public; like voting, driving a car or getting education in schools; women have to fight to be heard in the most silent rooms.

What is Women’s Equality?

Is “equality” a term exclusively used for women? We fail to realize equality is not meant to be gender biased. “Gender equality” is the correct term to use. What does Gender Equality mean? People of all and any gender are free to follow their own pursuit of whatever makes them comfortable and happy, without discrimination of which sex they are recognized as.

We use the term “women’s equality” to distinguish how much women are marginalized. Women may make half the population of the world, but they sure don’t have even half the rights handed to them- since birth.

The insecurity and discouragement starts from an early age for girls. There’s always an issue with how a girl is “supposed” to behave. The stigma remains even after centuries of struggle. It’s high time women change this perception. Because only women can.

Want to encourage young girls? Help them from feeling insecure of their choices. Check out this article on “Time to stop hating on everything teenage girls love!”

The history behind commemorating Women’s Equality Day on 26th August  stemmed from the 19th Amendment in the U.S Constitution which allowed all American women the right to vote. Even though the amendment was ratified in 1920, allowing women nationwide to vote, the Native American women were not recognized until 1924. Furthermore, it took another 19 years for Chinese American women to be able to vote. And, it wasn’t until 1952 that Japanese and other Asian American women were allowed to vote.

Even after all that, women of colour struggled to be acknowledged as equals to their white counterparts. It was in 1965 that African American women were granted their voting rights.

Only in 1971, at the request of Representative Bella Abzug,the U.S Congress received a bill to observe the 1920 ratification of the 19th Amendment. Congress announced 26th August as Women’s Equality Day in 1973.

Women’s equality is a small concept of feminism. The aim is to eradicate the gender gap. That is, establish unbiased You can’t outright call yourself a feminist and get away without the side stares and scrutinising comments. Toxic feminism is the reason why. Some people have a twisted look on feminism its use. Feminism isn’t hating on men, feminism isn’t a guide on how to overthrow the male population.

Feminists started to exist because of what women had to go through to obtain basic rights.

Hard Facts about Women’s (In) Equality

The space walk was scheduled for March, 2019. But, NASA didn’t have two spacesuits suitable for women. The space walk postponed to October that year.

A few examples of women personalities who empower women around the globe. Whether directly influencing the changes or raising awareness, these women (and many many more) are our heroes.

While some of the most obvious barriers to gender equality have been removed, women remain second class citizens in the workplace. Sometimes the truth (really) hurts but you have to know it, to change it.

The improvements in women’s equality have been gradually increasing over the recent decade. It is obvious there is a long way to go before there is true gender equality.

Support equality because you are human.